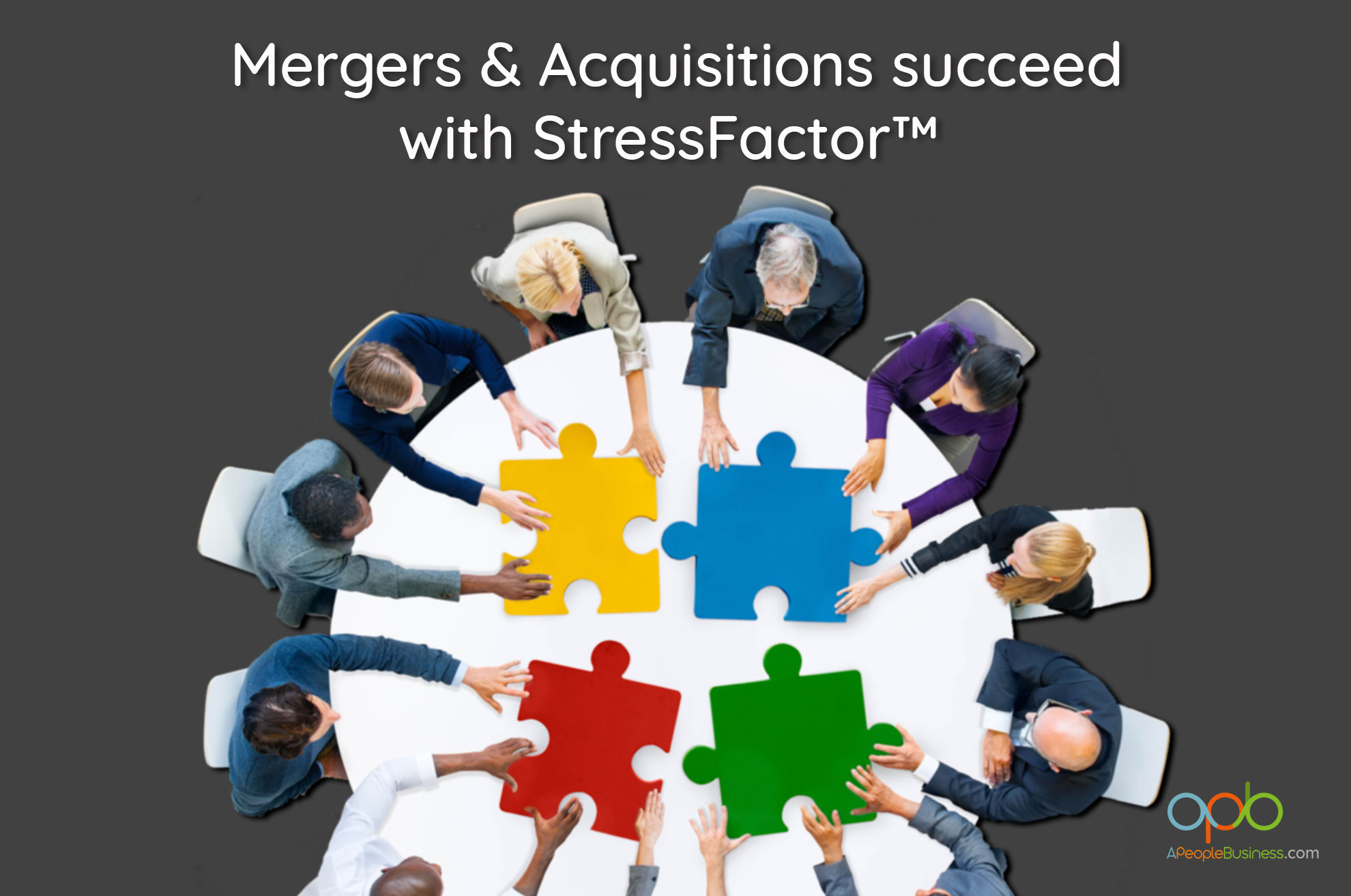 Mergers & Acquisitions are a business strategy for companies looking to grow their market share or gain a competitive edge by merging with, or acquiring another company. It’s part of the corporate landscape and can yield significant benefits for both companies involved.

As you would expect there are considerable challenges to be overcome for an M&A to succeed, and one aspect that is frequently overlooked and can undermine success is the human factor – the people behind the organisations and the company cultures. This is where StressFactor™, APB’s proprietary software solution comes into its own. It allows the human factor to be accounted for during negotiations, and ensures successful post-merger workforce integration.

What are Mergers and Acquisitions ?

Even though the terms are often used interchangeably, in business there is a difference between a Merger and an Acquisition (M&A).

A merger is when two companies merge to form a single new organisation. One of the largest mergers in history was when the two biggest US oil producers, Exxon and Mobil, merged to form a new company known as ExxonMobil.

An acquisition is when one company buys another by obtaining a majority ownership in the target company. A successful example of an acquisition was when Google purchased the mobile startup company Android, allowing Google to enter into the lucrative mobile phone market and successfully compete against Apple’s iPhones.

Why do M&A’s happen?

Mergers & Acquisitions are a business tactic to enable companies to grow rapidly. There are many reasons for M&A’s, these include companies wanting to:

The problems associated with M&A

Not all Mergers and Acquisitions go well, even if on paper there appears to be synergy.

For example the merger between AOL and Time Warner for $350 billion should have created a media giant spanning film, TV and online. Yet just two years after the merger the new company reported losses of over $99 billion! The reason for this dramatic downturn was reportedly due to a clash of company cultures; AOL had a more ‘aggressive’ culture that did not fit well with Time Warner’s more traditional, corporate culture.

There are huge risks as well as upside benefits associated with M&A’s, with vast sums of money to be made or lost. With so much at risk, what can companies considering a merger or an acquisition do to reduce uncertainty? It is a given that the process will include financial and legal due diligence. But for APB it’s about getting to understand the capabilities of people behind the companies involved; their mindset, aptitudes and personalities.

One of the biggest reasons for failure is something that most simply overlook: human capital. In a word, people. In the run-up to the deal, companies nearly always ignore the issues around their people, namely, culture and leadership.

How to manage the M&A process

During the early phases of negotiation few people outside the boards of both companies will know what is going on. However when the confidential negotiations have concluded and it has been decided to formally go ahead with the M&A it is imperative that you have a communications plan in place. Your business reputation will suffer if shareholders, employees, clients and suppliers find out about the changes by reading a random social media post or a 3rd party tweet.

By explaining clearly and sensitively the reasons behind the M&A you will control the narrative, and stop unfounded rumours circulating. Transparency also creates goodwill and reduces fear of the future within the workforce. This will help stop key employees jumping ship or being poached by rivals before the new structure is in place.

Also critical to a smooth transition is the creation of an Integration Team to oversee the merger. It will need to analyse corporate cultures, assess employees and perform due diligence. APB has the toolset to help your mergers team.

StressFactor takes the stress out of M&A

APB’s StressFactor™ solution is specifically designed to surface underlying culture and workforce issues that can cause problems during the M&A process. It assesses the strengths and capabilities of the people within both organisations, and presents its conclusions in easy to understand heat-maps. This allows board members and the integration team to identify potential friction points and mitigate them before they negatively impact the M&A process.

StressFactor™ is an invaluable tool when deciding how to best integrate the two companies’ teams of employees. Our software clearly identifies the personality traits of key personnel within both workforces, this allows the integrations team to make informed decisions about which people will work together in the newly formed team structure.

With so much at stake when it comes to M&A ‘s, StressFactor™ has an invaluable role to play in identifying and preventing workplace and culture issues that can negatively impact future success.

At APB we know that people are the biggest asset within a business because it is they who allow companies reach goals, innovate and sell products & services.

StressFactor™ is a cost-effective and efficient solution to understand the human factor during a Merger or Acquisition. It gives valuable insights into both the workforce and company cultures before, during and after the integration process.